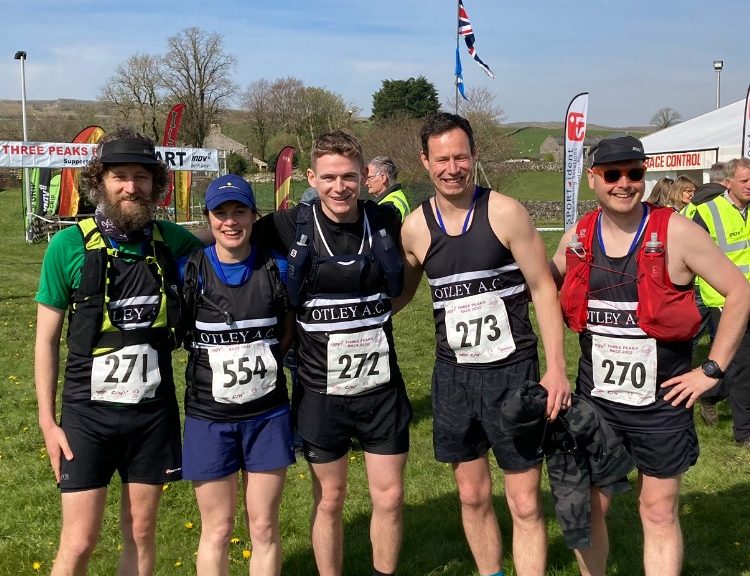 The race consists of 23ish miles and 5000ft of elevation over the Yorkshire 3 peaks Pen y Ghent, Whernside and Ingleborough. The winners on the day were Brennan Townshend from Keswick AC 02:55:34 and Sarah McCormack from Ambleside AC 03:23:21. The course record still held by Andy Peace at 02:46:03 in 1996.

Olly Richards, Matt Clegg, Laura McCabe, Tom Lynch and Ross McCall were the fortunate/unfortunate Otley AC 3 peakers this year. We Travelled as a team in the Van with talk of cut off times, sub 4 or 5 hour goals, and successful bowel movements that morning. It felt like a real privilege to run in a race steeped in fell running history. Joss Naylor wishing good luck to all competitors was a nice touch. The weather was almost too good as we all complained about the heat in true British fashion. Factor 50, sunglasses and hats were all essential as we stood admiring the fells in Horton in Ribblesdale. Caron and Andrew were on hand to take any supplies to the top of Ingleborough where they waited with jelly babies and pork pies. Caron even kindly pre opened gels for the runners. Club El presidente Graham was in attendance to cheer on the black and whites at various points.

The quick climb up Pen y Ghent was a dry rocky path. Approaching the summit the leaders came flying past descending at a frightening speed. Then was the long slog to Ribble head viaduct. The support was fantastic and water stations very much needed. The foot of Whernside was the only boggy part of the course. Having not done the race before (or a recce) I was warned about the steep ascent to the top of Whernside. The climb requires clambering using your hands to not fall off the fell. The climb is demanding but the support at the top helped with the last and steepest 100 metres. At the top the cramps start to kick in. The idea was to consume salt and hope the dreaded cramps subside. The walking route was extremely busy on race day and required technical descending on steep fells and avoiding walking sticks.

We all agreed that the heat made the race very demanding and we would have preferred a lovely wet, windy and gloomy day, however the picturesque views made it a fab day out. I have no doubt that The Clegatron has the physical and mental strength for the 3 peaks, so definitely some unfinished business for next years race. Sub 4 hours for Tom was a great time, Laura 11th in her age category (I won’t say which category that is as I’m a gentleman), Olly couldn’t shift the cramps and rumour is that he stole some salt and vinegar crisps from a child. Hopefully we have some more black and whites willing to take on the challenge next year. Big thanks to chevin step reps.