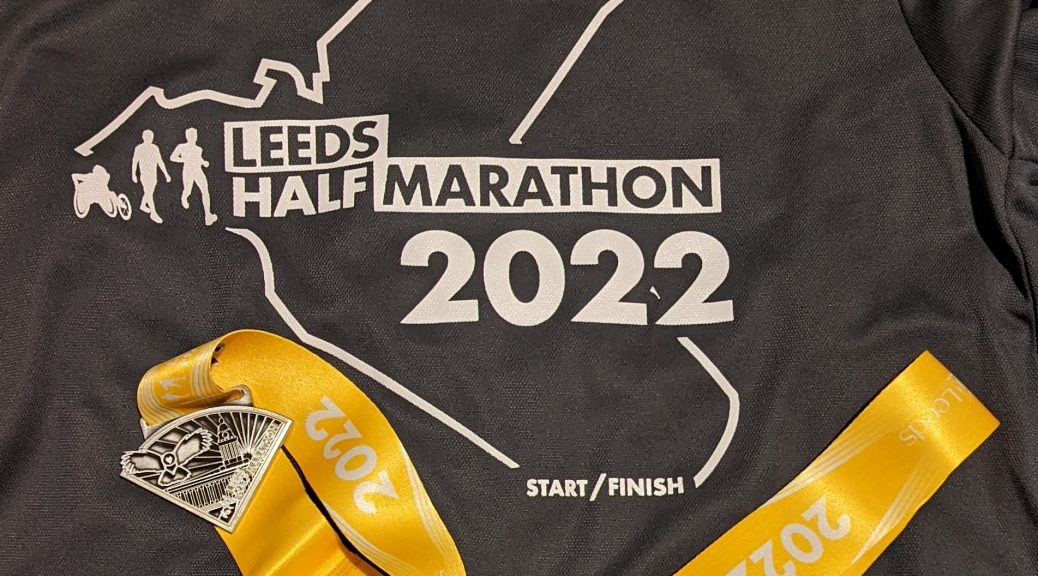 It’s always tricky getting into Leeds from Otley on the day of the Half Marathon, so I was very grateful to be offered a lift by Andrew Webster. Thanks to the Websters, the journey was easy and we arrived in plenty of time to get bags dropped and legs warmed up in the cool spring sunshine. The forecast was for good running conditions: not too much of a breeze, not too warm, a little cloudy with occasional patches of sunshine. A few people had recounted tales of very hot weather for this race but it looked like today, the weather would be kind.
I had previously run this race about 20 years ago and had memories of a bit of a slog up to and along the ring road. Back then, I wasn’t that prepared and I think my time was 2h15m (can’t quite remember). I was hopeful that I could beat that, with recent Marathon training miles under my belt, I would have to see.
Leeds was buzzing as we made our way to the start of the race in front of the Art Gallery. Andrew and I were in the first zone and we were joined by Henry Jeffreys and Mark Garnett as we made our way to the start line. It’ll be good when the new vests arrive as two of us were in black vests and two in white.
I tried to start between the 1h30m and 1h35m pacers as the race set off, but in the first surge the faster pacers got ahead of me and I wondered if I would see them again. As we set off, I vowed to ignore my watch and just run on how I felt. Resisting the temptation to keep checking the time and mile splits was tough but at least I didn’t feel under any pressure. I was hoping I would see the 1h30m pacer ahead on the straighter sections of road as we left the city centre but there was no sign. The race route heads east out of the city centre, along North Street and through Little London before joining Meanwood Road where it starts to climb a bit. From Meanwood Road the route joins Stonegate Road, where the steepest ramp is, before it joins the Ring Road and starts sweeping back to the west. The hills aren’t too steep but do drag on a bit, thankfully there was plenty of support on the roadside to cheer us on. The Ring Road is probably the worst section, one lane is coned off, so you run alongside beeping cars on an undulating and fairly featureless stretch of road, the experience got much better nearer Lawnswood though as I saw my wife and daughter cheering me on at the roundabout: thank you! From here on there’s a wiggly section before Hawksworth Road and the drop down towards Kirkstall Abbey. At this point, there was a bit of a headwind but the temperature had increased as the sun began to shine. It was probably 15 degrees but felt like a desert road before the next drink station, a warning that I probably hadn’t drunk enough. The last water station thankfully came as a relief at 11 miles and when the 12 mile banner was behind me I dared a look at my watch: I think it said 1h26m with 12.66 miles covered; I couldn’t do the maths in my head so just tried to push on for the last half mile. I saw the 400m to go banner and there was the pacer with his 1h30 flag shouting at us that we could still make it under 90 minutes, I surged as best as I could, with him running beside me shouting encouragement, and crossed the line with 1h29m50s on my watch! Had I done it? I’d have to wait for the official results…
Thanks again to the Websters for driving and supporting. Well done to all the other runners especially those from the Otley AC, getting PB’s and running their first half-marathons!

One thought on “Sunday 8th May – Leeds Half Marathon”