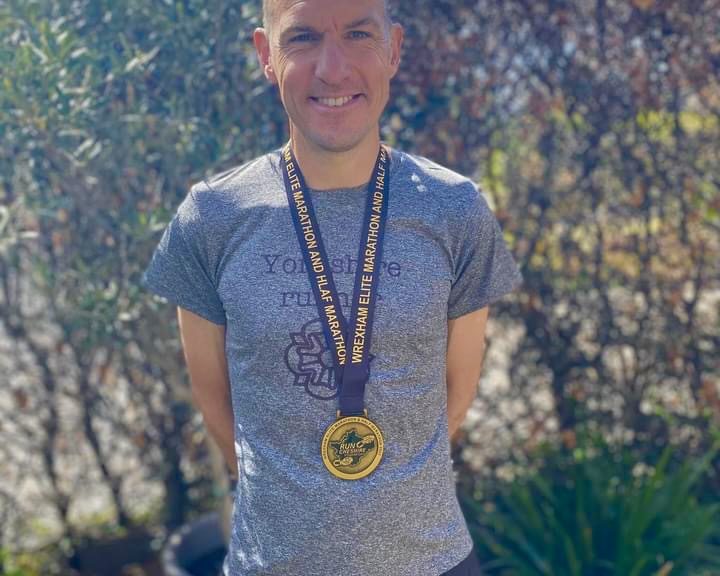 A marathon for sub 3 hour marathon runners only, 7 laps on a closed flat rural road, with massive pb potential and racing against some of the best in the country I just had to do this event. The training block started well for the first few weeks however coming down with covid twice in a relatively short space of time meant I had to revise my race plan as I knew a pb was out of the question. I had 2 choices I either didn’t do the race or I did it with the aim to run another sub 2.30, after speaking to coach Andy and after a decent 3 weeks of training we decided to give the race a go.

Gemma drove me over on the morning of the race and with the race starting at 8.30am it was a very early alarm clock!! Gemma also was to play a vital part in my fueling during the race my strategy was gel, carb drink and water on alternative laps (3.75 miles per lap)which worked like a dream and it was great to see her on each lap for support and fuel she was great. Standing on the start line I’ve never felt so relaxed before a marathon, the plan was simple set off at sub 2.30 pace and see how long I could maintain that pace. A lot of runners went off way too quick but I didn’t get carried away and stuck to the plan, the loop was half rural country road and half industrial estate and conditions where pretty good apart from a slight headwind on the top section for about 2 miles but with the sun shining that actually helped to cool me down. The laps quickly went by and I was feeling comfortable at the pace and I knew by lap 5 that sub 2.30 was probably going to happen, I got to lap 6 and the final lap and I overtook quite a few runners and I’ve never felt as strong in the latter stages of a marathon probably due to my pacing and not worrying about the race beforehand, on the home straight and crossing the finish line looking at the clock 2.29.48. Mission accomplished!!

I finished in 12th position and 4th v40 but I didn’t care too much about that as today was all about the time. With it not being a big city race you didn’t get the crowds of support, but what you did get was lots of top runners to race against so I was in my element and it’s definitely a race I will do it again next year as I know if I’m fully fit and conditions are good then I could definitely dip under 2.25. Now for a bit of down time then Harrogate league!!