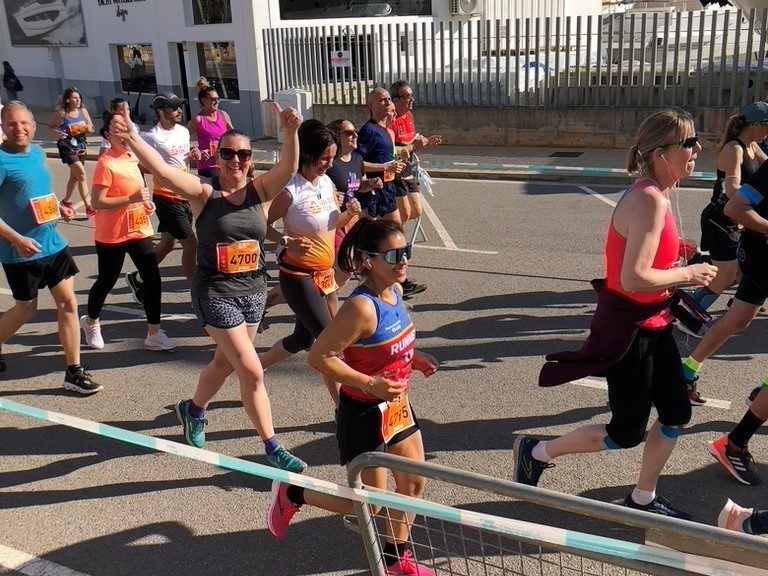 Over 4000 athletes turned out for the official return of the Ibiza Marathon festival, the first full event since 2019.

Once again runners from around the globe swamped the island towns of Elvissa and Santa Eularia to participate in one of the 5 different events taking place.  The show opened on 8th at the Palau de Congressos with pre-race registration and runners fair complete with live DJ set in case anyone was in any doubt where they were, and the party atmosphere began.

Ned and I were lucky enough to meet up with the national Ethiopian marathon team, stretching their legs and warming up for the full season to come.

Saturday morning started with a slightly chaotic series of children’s races along the marina.  Bright sunshine and a light breeze made for great conditions and even here the international vibe was established. Ibizan and Spanish clubs put out teams alongside visitors from Germany, Holland, France Ireland and the UK.

The first race saw a confused gaggle of toddlers veering off in every direction with not all remaining on their feet for the duration of the 250m race! Next up were the under 8’s followed quickly by the under 10’s.  Both were comfortably run by a pair of brothers whose parents were later seen putting in a great performance in the 42km relay event.

Agnes represented Otley juniors confidently.  Despite getting boxed in on a narrow start line, she paced well over the 2-lap course, picking off runners she achieved 3rd place for the girls and 6th overall.

The under 14’s was dominated by a local club who fielded an impressive team.

After lunch and a siesta, it was time for the adult events.  The marathon set off at 4pm from Elvissa and followed an inland climb before returning to the coastline.  Sections of this route were also shared by the 42km relay, 22km and 12km events which meant everyone benefitted from the support of the crowds, finishing together on the seafront in Santa Eularia.  When Ned and Carmel set off on the 12km race at just after quarter to five the temperature was still sat at a toasty 20 degrees and didn’t budge till the sun finally went down.  Ned selected the sub 50 pen whilst I sensibly opted for a slower pace.  With pumping house tunes and plenty of dancing, everyone was whipped up into the party spirit and the street lined crowds cheered everyone over the start line and through the first few hundred yards.

In the sub 50 pen it was a bit of a shaky start, jostling to find space and avoiding Instagram influencers amongst those who were already walking by the 1km marker.  At the 2km point, Ned had found his rhythm and was heading out on the main road towards Es Canar.  The next stage gave the opportunity for a bit of shade and water station 1 where he was met by a character chef brandishing a giant Spanish Jamon! Through the small coastal village of Es Canar, runners were greeted with much needed support from a mix of locals and tourists as well as a refreshing breeze.  Water station 2 and the 7km split (26:20) was the start of the most challenging part of the run; a solitary 2km steady climb in the blazing sun, no crowds, no distractions just the road ahead but the recognisable tune of Oasis’s ‘Don’t look back in anger’ playing live at the roundabout kept him going through the 9km marker and back on the return route into Santa Eularia for the final beachside kilometre. With the Mediterranean sea on the left and a wall of spectators on the right, cheering and high-fiving him on Ned finally had an opportunity to tune into the cheers of “Vamos Vamos” and “Muy Bien Chico” before he spotted Ben, Finn and Agnes in the crowd and sprinted the final 200m to cross the line in a time of 44:59 (9th overall, 8th male finisher & 2nd U23).

When asked how he felt about the race Ned simply replied: ‘they gave us these amazing dried strawberries at the end’.

Somewhere in the second half of the pack meanwhile, I was enjoying the atmosphere, if not the heat.  Shortly before the 3 km point I was passed by the lead Marathon runner, Ethiopian, Negassa and about 2 mins later the second place finisher and team mate Felate.  Negassa went on to finish win the event in a time of 2:16:24 – not a course record but still very impressive and to have the opportunity to share a course with them both and their effortless strides was pretty awe inspiring. Fellow Ethianpian, Nashenfi, was the first female runner completing the course in 2:33:37.

At 4km the live band played an Adele cover whilst a little further down the road I was high -5’d by a 7ft lobster as I turned towards Es Canar.  More music in the village gave an opportunity to enjoy a Chariots of Fire moment with the crowd. My fellow runners and I were extremely grateful to see the hydration station just before the 7km marker.  As Ned had already experienced, this next section was undoubtedly the toughest, heading back up towards the main road and the band (this time playing Guns and Roses).  Happily, I was able to share a couple of words with a Dewsbury Road Runners veteran who helped keep me going.

After the final turn back to the coast I finally allowed myself to believe I could finish this event which was an emotional moment following a couple of years of a persistent knee injury.  The enormous crowds, beautiful views and awaiting family made the final 1500m some of the happiest steps I’ve run.  1:16:32 might not be a record breaking time, or even the fastest I’ve ever managed but this was by far the most enjoyable running event I’ve ever participated in and one I was able to share with the whole family.  So for anyone wanting to combine a bit of travel with a bit of running, Marathon de Ibiza certainly has something to offer everyone.