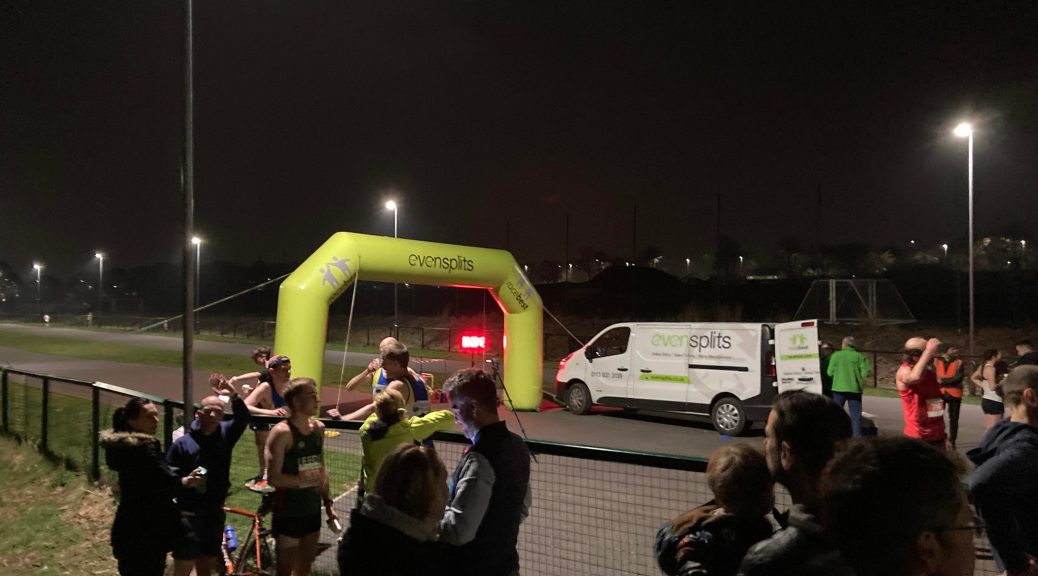 After a glorious and warm spring day it was looking like conditions would be excellent for the Even Splits Leeds 5K and Club Championship race at the Brownlee Centre. The warm day gave way to a pleasantly cool and still evening, which was a nice contrast to last month’s wind and freezing rain.

As usual the race is split into two heats based on an expected finishing time of under or over 20 minutes. The slower finishers set off first at 7.15pm with the faster runners starting at 8pm. Each runner scores points for their club just for taking part with bonus points for podium places.

There were only four Otley AC runners racing, with two in each heat. Edward Hobbs and Stephen Morris would run in the later heat, while Gavin Burton and I would run in the earlier one. Over 160 runners took part in the races in total with many other local clubs well represented.

The start line was a bit of a scrum with a return to mass starts and people trying to find their place in the pack, I tried to make my way to the front of the group as quickly as possible as everyone started to get strung out along the first incline. I felt pretty good after the first lap nerves had settled down and wondered if I might be on for a decent time, especially with no headwind on the back straight to contend with. After a relaxed second lap, with 13.5 minutes on the clock, I thought I should see what was left in the tank and pushed it for the final mile. The effort paid off and I was amazed to see 19.20 on the clock as I neared the finishing line. My chip time was a new personal best of 19.22, knocking over 20 seconds off my previous! Gavin wasn’t far behind me in 20.17.

In the later heat, Edward Hobbs got a fantastic 5th place finish in a great time of 16.17, with a good run from Stephen Morris in 17.31.

Well done to everyone who took part!

and additional comments from Stephen Morris:

To add a few of my own words: Agreed, conditions were pretty decent, no wind and a balmy 11 degrees (on the car thermometer!). In the A race it was noticeable how many more people were there this round.I feel since the pandemic, I am starting to get much better at racing and finding my form, which is coming back to an unprecedented level based on recent results.

I had to take almost 12 months off last year due to a back and hip problem. But adding some daily yoga and flexibility work, plus building myself back up with a focus on form is clearly working wonders for me. I also barely run on roads anymore, usually trial or moor runs for me now.

Most people won’t know my history, but I have only been running ‘seriously’ for about 5 years. I mainly played team sports in my 20s and all this running business is still quite new to me.I was going for sub-18 again, and felt pretty good all the way round. Trying to run as hard and as even pace as possible (it’s called even splits for a reason, right?). The race clock was 12 minutes after 2 laps, and as I came into the final 100 metres I could see it’d only just ticked over to 17 minutes!

That was a huge boost and I had enough left to get over the line in 17:31. A huge PB by 27 seconds, I can still hardly believe it.So, all in all another great evening a the track. I am starting to wonder now whether I’ll be able to come close to this again, who knows?

Leeds HM is the target race for me which is only about 8 weeks away now. My PB there is 1:23, so hopefully will be close to that. It was also nice to chat to Edward (and I’m presuming Dad) after the race. What an inspiring run from him.

Full results are here, Entry for next month’s race is here