Report from Howard Jeffrey: Some time ago I noted that this weekend gone there was scheduled the Wakefield half marathon which was mainly off road on trails in a country park. I saw no further reference to it at all (members of the local Wakefield Triathlon club had also never heard of it!) but on Friday, the last day for entries, I thought I might like to do it. There were two online entry methods. The first I tried wanted £32 which I thought was a lot for a low key half. The other was priced at £20 which is about the going rate so I was in. There were less than 200 entries split between the half and the full marathon. I optimistically turned up with a choice of sunglasses but just prior to the start it was overcast and a few heavy showers. These had gone by race start time (which was delayed while latecomers dawdled from the car park…start time 10.00 or maybe when you like… the others won’t mind waiting around). Anyway at the ‘gun’, just a guy saying ‘go’ as it was around a wildlife reserve so no bangs allowed off we went. The route was in and around what I guess are old mine workings on tracks and trails around lakes and ponds with some long views of lovely open country. There were pinch points and tight corners on the trails and the weather got quite warm and a bit breezy. I thought it was quite undulating as well. There were times there was no-one else in sight and there were eventually 66 finishers in the half (I told you it was low key). The race was won by the aptly named David Wakefield of South Shields Harriers in 1.20.45, first lady in 2nd place was Claire Howard of Totley AC in 1.33.12. I was 3rd man in 1.36.50 (I know!) and Nick Hodgkinson 57th in 2.21.35. A nice T shirt and a medal (saying Wakefield Marathon so I will ink in the half) and I guess prizes in the post for third and/or M60 so all in all a great little race… but don’t tell anyone!! 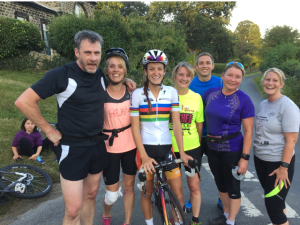